Home » Why Decluttering is so Hard

It's happened to me before - I've felt a surge of inspiration to tackle my clutter, and an hour and a half later I am sitting surrounded by even more clutter, on the verge of tears. Sound familiar?

Clutter is such a funny thing. At one point, it could have been a prized possession. Or maybe it was a freebie that you felt obliged to take at a job fair or something. Maybe it was a gift. Maybe you bought it yourself and now regret buying it but don't know what to do. It's an accumulation of stuff that is weighing you down. You know you need to get rid of stuff... but how? 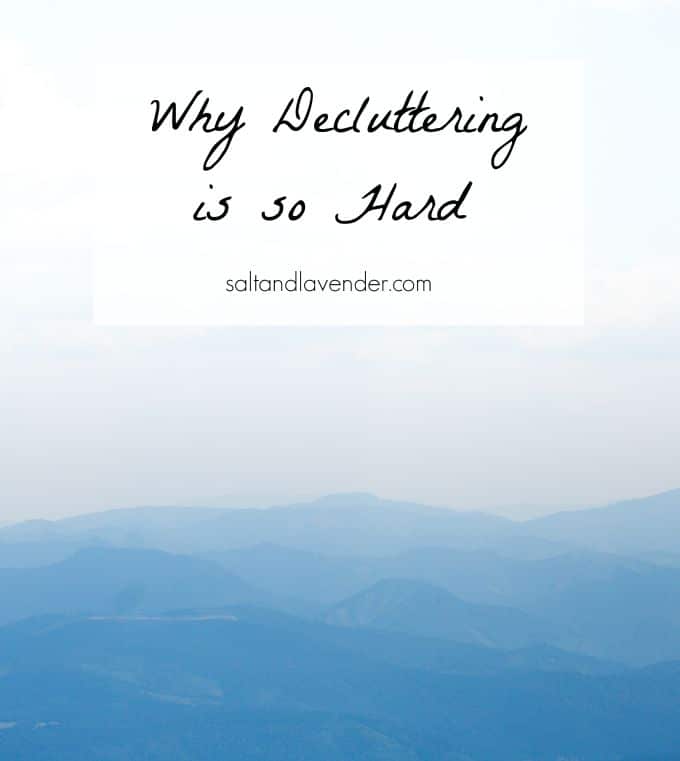 Where to begin decluttering?

I find it easiest to tackle a certain area at a time. Starting small worked for me... and I still start small if I am not feeling particularly motivated but know I need to get rid of some stuff. A junk drawer in the kitchen is an easy place to start. Evaluate each and every object in that drawer.

Some people suggest using a timer and limiting yourself to a certain amount of time so you don't get overwhelmed. This can work well with larger projects (such as an overflowing closet).

When I am struggling with whether to get rid of an item (donate/give away, trash/recycle, sell) or not, I handle it in two ways:

We all have excuses, and some of us (me included) are in various stages of denial over what is and isn't clutter. You have to give it some thought. There is no easy way around this. Identify what excuse you're using to hold onto something, and then figure out why you're thinking that way.

"But I might need it someday!" - Yes, you might. However, the odds that you will and won't be able to either buy a new one or borrow one are slim to none. We all have objects like this. Maybe it was the ice cream maker you put on your wedding registry but never used. A variation of this excuse is the dashed dreams excuse. You know, the guitar you bought hoping you'd stick with lessons.

All the essential oils you bought in hopes you'd become a master perfumer (guilty). The ski pants you've held onto even though you haven't been skiing in years (guilty). That exercise machine... you get the gist. Oh, and if it was expensive - well that's too bad. The money has already been wasted. Figure out if it's worth your while to sell it, and if not, cut your losses.

"But my favorite cousin gave it to me!" or "But it reminds me of a certain time in my life" or "But I am weirdly attached to this item and I can't explain why!" - So? Ok, I admit I struggle with this one. Ah, sentimental clutter. This is the excuse that I struggle with the most. There are just some things I can't part with, and that's ok. It's when you're in a situation where you believe EVERYTHING is sentimental that you have a problem.

You really have to dig down and figure out whether something is truly sentimental to you. This may not happen overnight for some items, by the way. It took me like two months to part with a fake plant I bought for $60 that was a dust trap and eyesore. Was I relieved when we finally chucked it? Yes. I did not look after it... it did not mean that much to me. It's also ok to realize that not everything is built to last forever. I sometimes struggle with this one, but there's no sense holding onto something that has fulfilled its purpose and is no longer needed or no longer works.

"Isn't getting rid of stuff wasteful?" - I get that some of us were raised at a time when resources were scarce, or perhaps we had parents or grandparents that refused to get rid of anything. Everyone has a different perspective on this, and I am by no means suggesting you get rid of perfectly good items and go out and buy the shinier, newer model just for the sake of it.

I am suggesting that keeping items you never use or that add no value to your life is not helpful. To anyone. You are not being noble by keeping all that stuff in boxes. Of course it's a good idea to use items until you can't use them anymore, but let's be realistic. We don't all do that with all our possessions for various reasons. Donate if you can. Chalk it up to a lesson learned and don't repeat the mistake.

"But it was a gift!" - As far as gifts go, most rational people realize that they're not going to hit a home run every time. That's why gift receipts were invented. We all sometimes get stuck with duds, though. Do your best to give the gift a nice new home. That's the best you can do. I am sure the gift giver did not intend to burden you with it 'til the end of time. Put yourself in their shoes. If you gave someone a gift, would you expect them to hold onto it if they didn't like it? Probably not.

I am sure there are many more excuses as to why people hold onto clutter. What's yours?

The objective here is not to become a minimalist (unless you really want to). There is no competition you need to win. You don't need to get rid of everything. It's ok to make deals with yourself. For example, one day I decided that I was hanging onto way too much costume jewelry from my childhood/teenage years. I hardly ever looked at it (it was buried in a box), and it was stressing me out because I had so much of it and it was just more STUFF.

So, I kept a few pieces. Getting rid of it all would have been too hard, and I would have given up. Getting rid of pieces I didn't really like all that much wasn't too hard, though. You want to be somewhat ruthless when decluttering, but if you do too much or expect too much, it won't work. This is one of those things that works better slow and steady, I find. A big purge is not my idea of fun.

To declutter, you do have to make some hard decisions unfortunately. Being honest with yourself is a good start. Or even getting a second opinion to snap you out of your woe-is-me BUT I REALLY LOVE THAT FAKE PLANT mood (thanks dear!).

I don't think that getting rid of stuff comes naturally to many people. It is something that can be worked on, though. One thing that helps some people is to take a photo of the item you're getting rid of. That way, you know the memory will be preserved, but you can get rid of the item.

At the end of the day, you either want to get rid of the clutter, or you don't. The process really sucks sometimes, but I can promise you that it is worthwhile.

Why decluttering is so hard - because we're human!

You can read more of my articles on decluttering here.