These cream cheese mashed potatoes are fabulously creamy and buttery with a hint of tanginess. This restaurant-style side dish is simple to make, and everyone will want seconds. 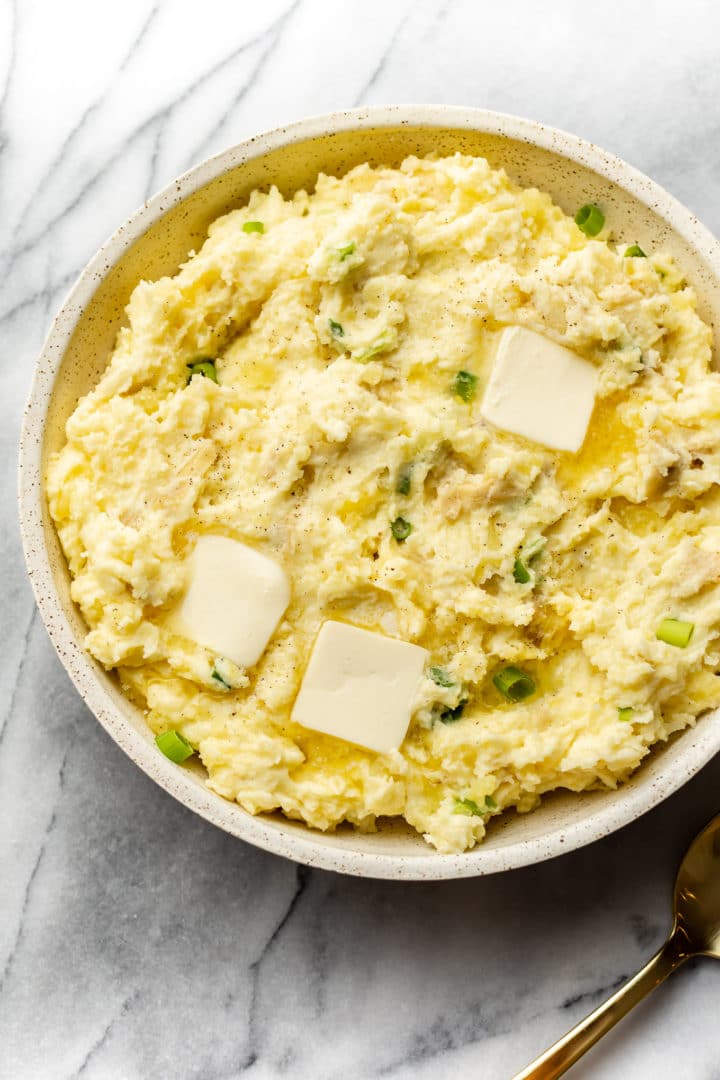 I have several mashed potato recipes on this website, including (but not limited to) these Easy Garlic Mashed Potatoes and my Bacon Ranch Mashed Potatoes, but I've gotta say that these might just be my favorite so far.

I'm a fan of creamy, rich mashed potatoes that are loaded up with butter, cream, and in this case cream cheese. You could flick them at a wall and they'd stick. With that said, these aren't gluey. There's a fine line between over-mashed potatoes and potatoes that are just right, but I mean even bad mashed potatoes are usually pretty good haha. But these aren't bad at all! 😉 If you're mashing them by hand, they're less likely to go gluey, so that's why I recommend doing it the old fashioned way vs. using a hand mixer. 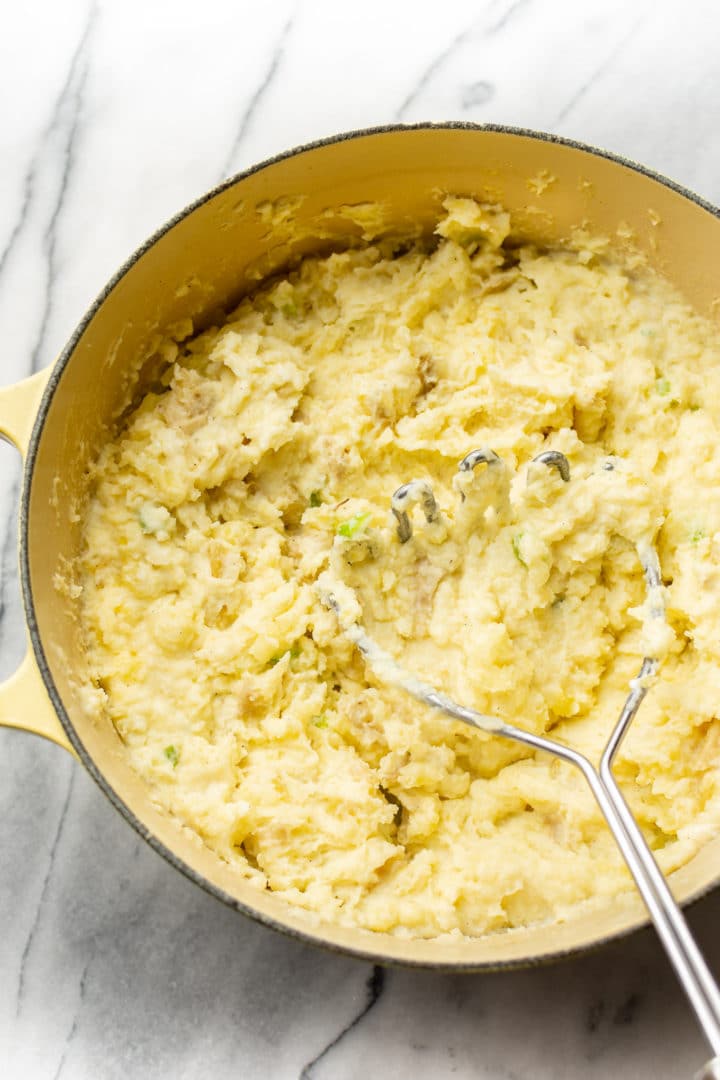 I left the skins on in this recipe, but that's optional. I like the added texture, and the Yukon Gold skins are fairly thin. If you leave the skins on Russets, be sure to scrub them well.

I've probably mentioned this before, but mashed potatoes and burgers/sandwiches are probably my least favorite subjects to photograph, but I wasn't even mad when I had to redo these creamy mashed potatoes when the first batch of pix didn't go so well. It's hard to build contrast with beige foods especially if you own as many light colored bowls and light backgrounds as I do! I'd say the second batch of the photos went better, as did my 9th, 10th, and 11th helpings of these potatoes. Omg.

Prefer to use sour cream? Try my similar Mashed Potatoes with Sour Cream. 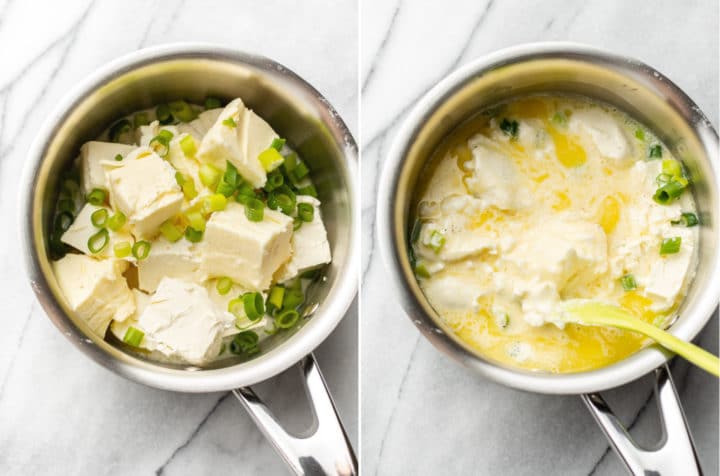 More delicious side dishes to try: 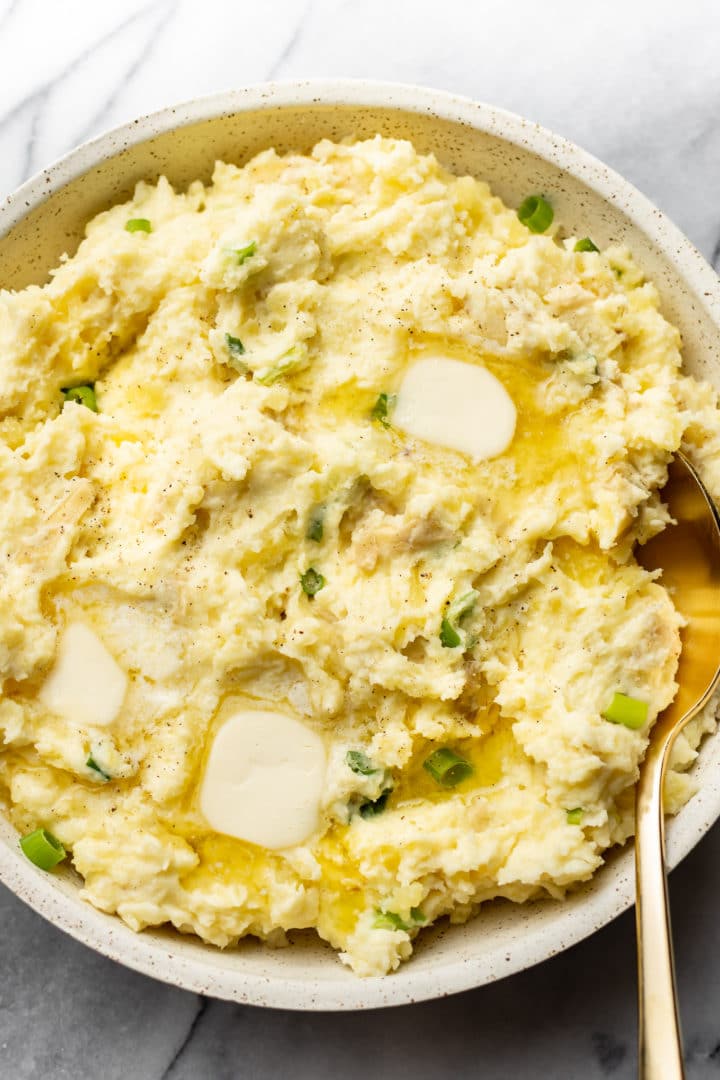 Have you ever tried making mashed potatoes with cream cheese? Questions about this tasty side dish? Let me know in the comments below!

These cream cheese mashed potatoes are fabulously creamy and buttery with a hint of of tanginess. This restaurant-style side dish is simple to make, and everyone will want seconds.
Print Recipe Pin Recipe
Prep Time 10 mins
Cook Time 30 mins
Total Time 40 mins
Course Side Dish
Cuisine American
Servings 8
Calories 357 kcal
Prevent your screen from going dark