If you don't like sad stuff, just skip over this post. I understand, and I try to avoid sad stuff too. Despite my best efforts, I couldn't escape it this time.

I am a fairly private person and try to focus on the recipes more than anything on this blog. I debated even writing this, but I figure that simply pretending I'm ok isn't really an authentic way to blog. I'm not just a recipe generating machine. I would feel strange acting like everything is fine and not acknowledging that I suffered a big loss. I'm going to try to use the blog as a distraction and try to keep to my regular posting schedule if I can, but at this point I don't know how that is going to look. I don't want to make recipes depressing or anything... but I also don't want to have to pretend everything is A-ok when it's not. The next few posts were written before this all happened, so I will just leave them as-is. 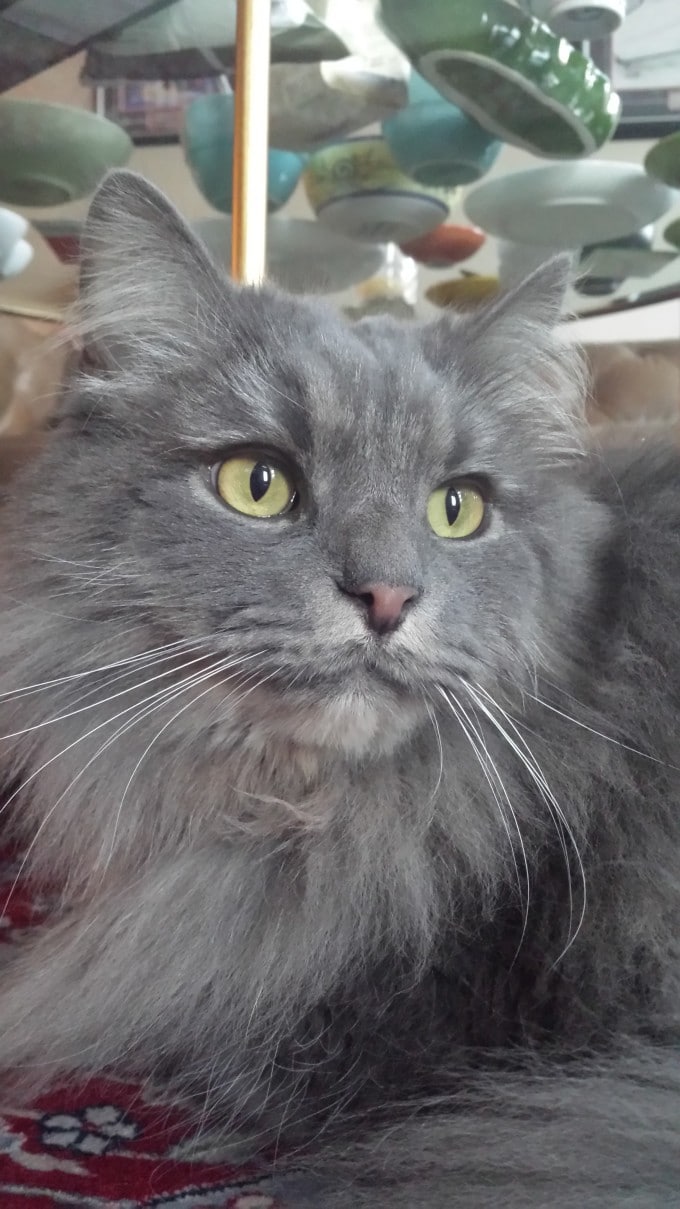 Yesterday my beloved 5 year old Siberian Forest Cat Oliver died. Understand that my husband and I are very much cat people and he wasn't just a pet to us. Oliver wasn't acting like himself for a few days (it was fairly subtle though), so we took him to the vet on Monday. X-rays were taken and it looked like he possibly had a tumor, but it was hard to tell. It may have just been the spleen, but the vet couldn't tell. We scheduled surgery for the next day, and hoped that everything would be ok. The vet kept him overnight. Yesterday was nerve-racking to say the least. I took the day off work as I was beside myself with worry. I basically sat by the phone all day waiting for my husband to give me an update. I knew things were bad when my husband updated me yesterday morning saying that Oliver's little kidneys were failing. There was some hope he said, but they wouldn't be able to do the surgery until they stabilized him.

He needed an ultrasound to figure out what exactly was going on, and he had one scheduled for yesterday afternoon. I had a horrible feeling that something was very wrong since I hadn't had an update in hours. When my husband finally walked through the door around 5 pm last night, I knew Oliver was gone. I saw he had brought Oliver's cat carrier back. A few seconds later he told me he was so sorry and that there was nothing that could be done. My poor little kitty was full of tumors. Lymphoma they suspected. They could have extended his life a little bit with radiation, but animals don't take well to it, and he would have just suffered. It was incurable. So my husband made the only decision he really could make, and had him put to sleep. He didn't want Oliver to suffer and he did not want me to see him in that state, tubes hanging out of him and fur patches shaved.

As I write this I am still in a state of shock and disbelief. This isn't an old cat we're talking about here. He wasn't even six. Life is cruel. He was just here and seemed fine. I worried about him all the time because I'm just that kind of person, but this was truly a worst nightmare come true. You don't expect to take your young and presumably healthy cat into the vet and have him never leave. I think my brain is still in the denial stage. I slept horribly last night and when I woke up this morning, I knew he was gone but I still looked around for him. He was truly a member of the family and not just a pet to us. He was probably the most pampered cat in the world. I can't believe I'm actually writing this.

Everything here reminds me of him and I feel sad and sick and empty. Every morning he would jump on the bed and lick/knead/cuddle me to wake me up after the alarm went (I'm not a morning person so this helped me actually get up). He slept at the foot of our bed and often woke us up at 3 or 4 am, but somehow we didn't really mind. He was like my shadow, following me everywhere and always in my bathroom with me, watching me get ready, or drinking water from the tap (his favorite). He greeted us at the door and I'd always scoop him up into my arms and he'd purr... then want to be fed. He was a climbing cat, which sometimes drove us a bit crazy, but he always ended up looking extra cute wherever he was hiding/sitting so I would take a photo instead of getting mad. As I sit here typing this, his giant cat tree is staring at me. We had a heck of a time getting that thing into our vehicle when we bought it a couple of years ago, but it was worth it. He definitely owned us vs. the other way around. He was a pretty big cat but had the tiniest baby meow. When he was a kitten, he fit in the palm of my hand. I waited about eight months to finally get him from the breeder (I am allergic to cats and Siberian Forest Cats are hypoallergenic). He was so tiny and scared but quickly took over my life (in a good way!). My husband and I started dating when he was still very young, so he has been a part of my husband's life almost as long as mine.

I was always such a proud cat owner and now I feel that has just been stolen from me. Looking at cat photos on Instagram was one of my favorite time wasters, and now I feel like that's just a terrible reminder that my cat is gone. Nothing feels right anymore. The only thing that would make me feel better is getting a hug from the sweet, fluffy little creature I will never see again.

Thanks for reading if you made it this far.

Rest in peace, my little angel.