Cozy up with a bowl of this beer cheese soup! This Midwest favorite is total comfort food and a fantastic option for game day or chilly winter evenings.

You may also like my Easy Buffalo Chicken Dip or this Beer Cheese Dip.

Why you'll crave it

Ok, I have to say the history of beer cheese soup is pretty interesting. It has its roots in Germany, where they made Biersuppe in the medieval days and actually ate a piping hot bowl of it for breakfast on the regular. It was closer to something like eggnog, but it became the inspiration for German immigrants in Wisconsin to combine it with cheese (because it's the dairy state, so obviously) and make the now-iconic beer cheddar soup!

This beer cheese soup recipe is next-level tasty with the addition of crispy bacon. The beer gives this soup its signature malty tang, and the creamy, rich, and cheesy broth has a great seasoning combo, making the whole thing totally irresistible. It's easy to recreate this pub favorite in your own kitchen using everyday ingredients. Beer fans, if you've never tried it, you're in for a treat.

What goes into it

What is sharp cheddar?

How to make beer cheese soup

Cut up the bacon and fry it in a soup pot until crispy, and then transfer to a paper towel lined plate. In the bacon grease, sauté the onion and celery until softened. Add the garlic and butter.

When the butter melts, stir in the flour. After cooking for a couple of minutes, pour in the chicken broth slowly and stir or whisk it in until the flour dissolves completely.

Add the beer, cream, Worcestershire sauce, Dijon mustard, cayenne pepper, and half of the bacon. Bring to a boil, then reduce the heat and simmer for 15-20 minutes. Take it off the heat and gradually stir in the cheddar. Season with salt & pepper if needed, and garnish with the scallions and remaining bacon.

What to serve with this soup

Have any questions about this easy beer cheese soup, or did you want to leave a review? Talk to me in the comments below! I'm also on Instagram if you'd like to give me a follow. 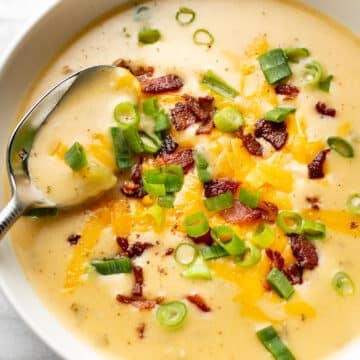