This creamy corn chowder recipe is loaded with sweet corn, crispy bacon, and hearty potatoes. It's a really satisfying one pot meal that's simple to make, and everyone will ask for seconds!

Got corn to use up? Try my Easy Creamy Corn Pasta or Cajun Grilled Corn on the Cob next.

This comforting and filling corn chowder recipe has it all. There's bright sweetness from the corn, savory goodness from the bacon, melt-in-your-mouth potatoes, and of course a flavorful and thick, robust broth you'd expect in any good chowder to make it totally irresistible. There's also nothing fancy here, just a few wholesome ingredients.

You can use either fresh or frozen corn to enjoy this easy corn chowder year-round. It's great as a summer soup when corn is in season, but there's no reason why you can't make it as a cozy meal when it's chilly out! I know I do. I based this one off my popular Easy Chicken and Corn Chowder, another family favorite you may enjoy.

Do I use fresh or frozen corn for chowder?

What is chowder vs soup?

How to make corn chowder

Prep the bacon, and cook until crispy in a soup pot or Dutch oven. Transfer the bacon to a paper towel lined plate leaving a couple of tablespoons of the fat in the pot, and sauté the onion, celery, and carrots until softened.

Still in the garlic and cook for an additional 30 seconds. Add in the flour, and stir it constantly for about a minute. Pour in the chicken broth and stir until the flour has totally dissolved. Scrape up the brown bits from the bottom of the pot.

Add in the cream, corn, potatoes, Italian seasoning, and cayenne along with most of the bacon. Bring to a boil, and then simmer until the potatoes are tender and it thickens up. Season with salt & pepper, and garnish with the rest of the bacon and fresh parsley if desired.

Try these cozy soups next

I hope you agree that this is the best corn chowder recipe you've tried! Leave me a review if you made it or have any questions. I'd be happy to answer them in the comments below. You can also find me on Instagram. 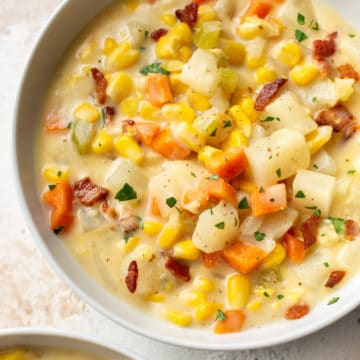