This creamy bacon chicken recipe is a decadent and delicious dinner that's easy enough for a weeknight and tasty enough for company. It's ready in about 30 minutes! 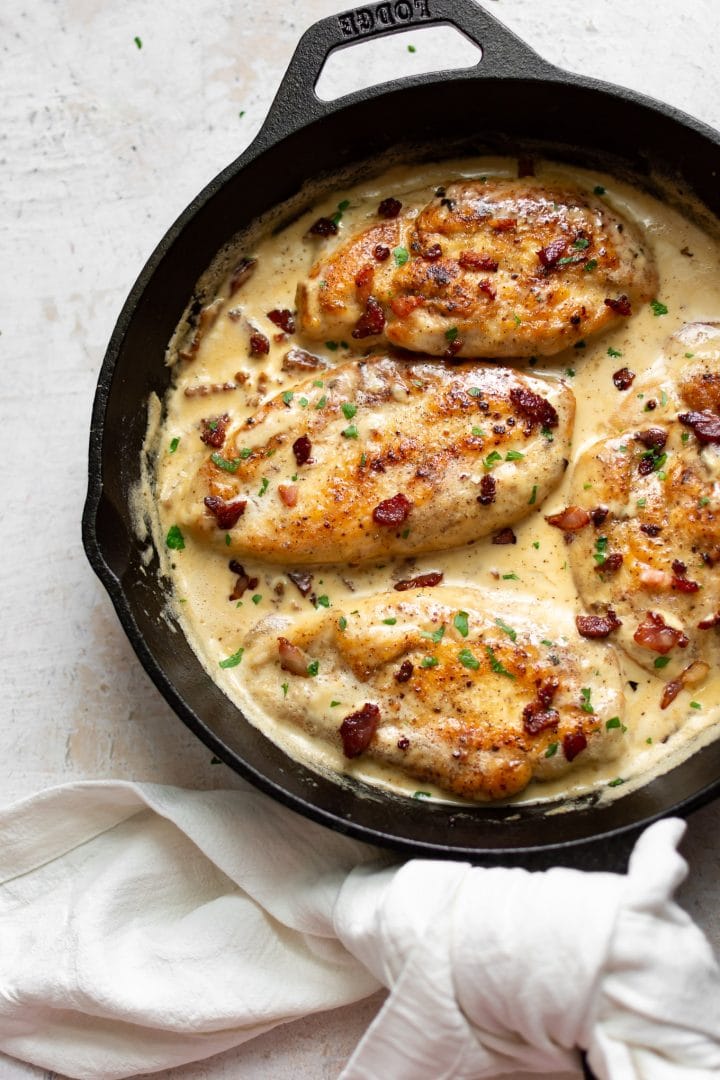 I probably don't have to sell you too hard, but chicken with bacon and cream is a great combo! Even my cream-loathing husband said it was really tasty. The chicken is pan-fried to a golden brown on the outside and when you bite into it, it melts in your mouth. And the bacon... well it makes everything even better. 😉

When you want comfort food (calories be damned... and no, I did not calculate them lol), this is your dish. 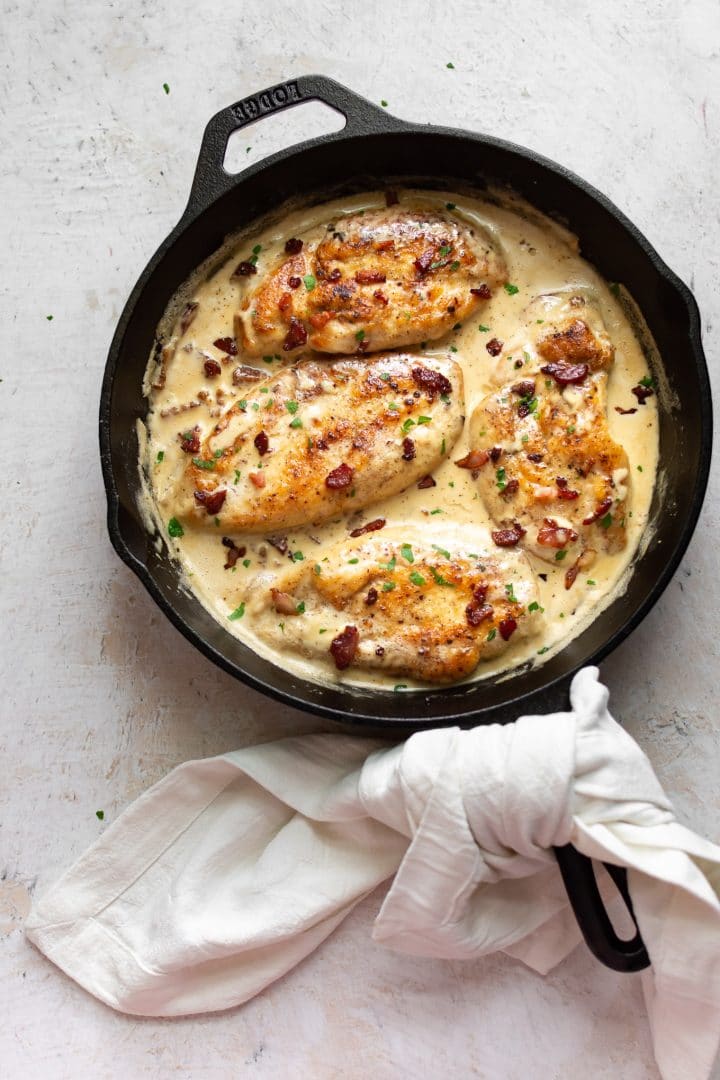 My sister (the vegetarian) actually came up with the idea for this recipe. She's like "Is it true that I can't find a creamy bacon chicken recipe on your site?" And I was like "hmmm.... there's a creamy chicken bacon gnocchi recipe on my site, but you're right". And so this was born. This recipe is straight out of the Salt & Lavender playbook... I have a lot of creamy chicken recipes. I list them at the bottom of the post if you want to take a look.

How to make chicken with a creamy bacon sauce

In order to prevent the bacon cream sauce from tasting too cloying and one-dimensional, I added a touch of lemon juice. The garlic powder added to the chicken at the beginning of the recipe also gives the sauce more depth of flavor. And browning the chicken in the bacon grease makes it extra tasty. Of course. 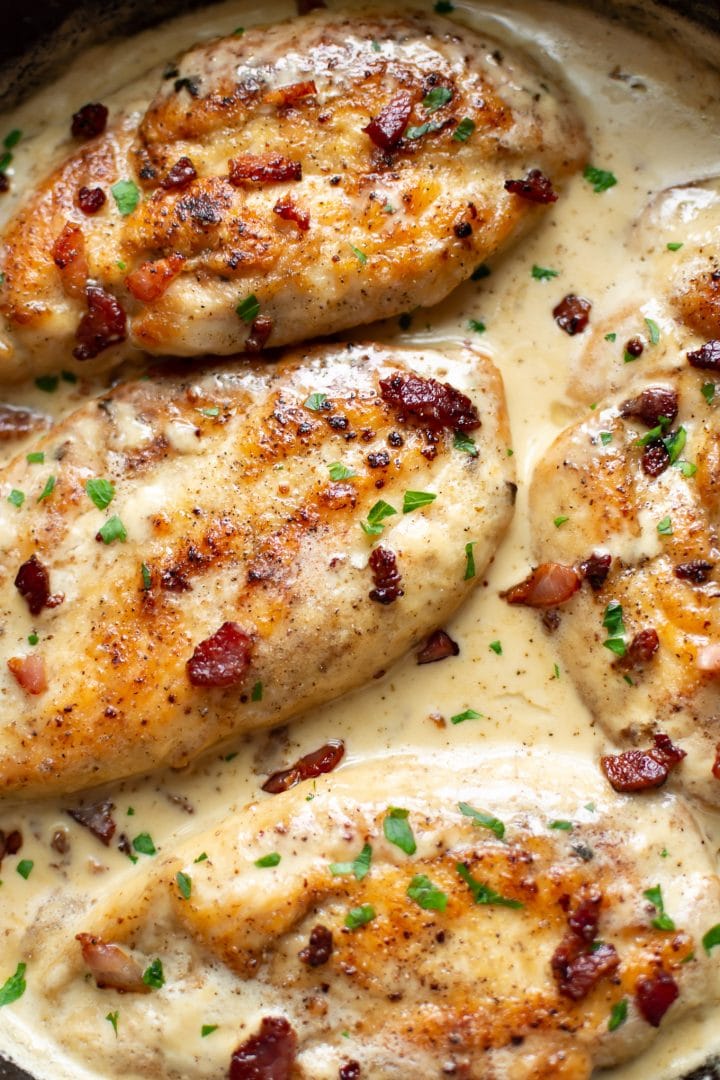 What kind of chicken to use?

I used boneless, skinless chicken breasts that I butterflied and then cut in half. I find that cutting the chicken this way helps it stay tender and it also cooks faster. You could try chicken thighs or bone-in chicken breasts, but you will have to adjust the cooking time as needed.

Can I substitute the cream for something else?

I always get this question on my cream-based recipes, and the answer really depends on your goals for the dish. I always recommend using heavy cream because the taste, richness, and texture just can't be substituted in my opinion, and it's also less likely to curdle/separate. Half-and-half or milk will make the sauce end up thinner/more watery, and you may need to make some tweaks like adding more flour or reducing the sauce for longer. Coconut milk/cream will give it a coconutty flavor, and other potential substitutes (sour cream, Greek yogurt, dairy-free options, etc.) could work for you if you've tried similar tweaks before, but the taste will definitely be different from the original recipe.

What to serve with creamy bacon chicken?

This dish is quite rich, so I definitely recommend some veggies or a salad on the side. The sauce is scrumptious over potatoes (try these roasted red potatoes or mashed potatoes), rice, or pasta. 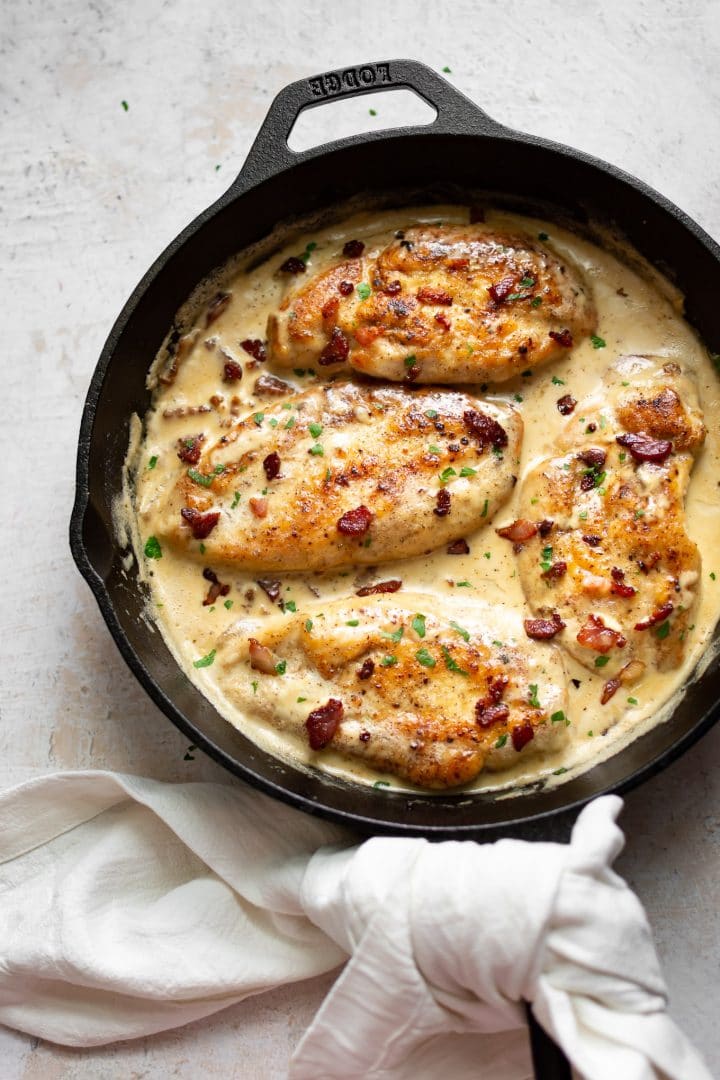 Will you make this chicken with a bacon cream sauce? 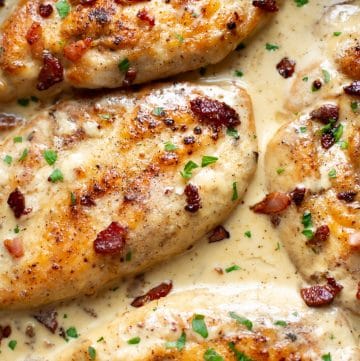