This German potato salad is loaded with tons of bacon and has the best homemade sweet and tangy dressing that has no mayo. It's a classic for your summer table!

I'm not kidding when I say that this is the best potato salad recipe you'll ever try. Really! The magic comes from tossing the potatoes in the fat that's left from cooking the bacon. It infuses so much goodness without being too heavy. There's no mayo in the dressing here, but it's overflowing with extremely satisfying flavor.

The dressing is both savory and slightly sweet, and the smokiness of the bacon paired with the fresh parsley just takes it over the top. It's a flavor explosion. This is typically served warm, so if you've never eaten potato salad that way before, you're in for a treat!

What is German potato salad?

What you'll need to make it

How to make German potato salad

Boil your potatoes whole (skins on). Add the dressing ingredients to a bowl and whisk together. Meanwhile, cut the bacon up and fry it in a skillet until crispy.

Transfer it to a paper towel lined plate, leaving the bacon fat in the pan. Add in the onion and sauté for 5 minutes, then stir in the garlic and dressing mixture and cook it until it's reduced by half.

Chop the boiled potatoes, and add them in along with the cooked bacon and parsley. Toss it right in the skillet and serve hot with extra salt & pepper if needed!

Can you eat it cold?

What to serve with German potato salad

Questions about this German style potato salad? Do you like it better than American versions? Let me know in the comments below! 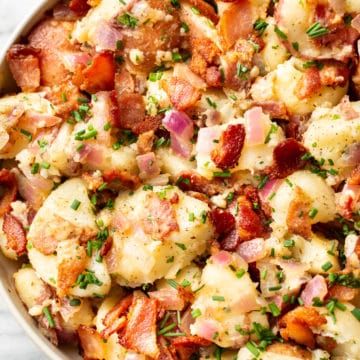 This German potato salad is loaded with tons of bacon and has the best homemade sweet and tangy dressing that has no mayo. It's a classic for your summer table!
Print Recipe Pin Recipe Save Saved!
Prep Time 15 mins
Cook Time 40 mins
Total Time 55 mins
Course Side Dish
Cuisine German, German American
Servings 6
Calories 359 kcal
Prevent your screen from going dark