This classic Caesar cocktail recipe has a delicious blend of bold flavors! You'll want to try Canada's national cocktail and find out why it's just so tasty.

Make this Classic Mint Julep Recipe next for another fun drink.

What is a Caesar?

It's Canada's answer to the bloody Mary. This zesty and spicy cocktail has a curious mixture of ingredients that together make magic. It tastes pretty close to a bloody Mary, but the Caesar uses Clamato juice instead of tomato juice. Ask any Canadian, and they'll tell you they prefer the Caesar, hands down.

I think that it's truly a shame that pretty much nobody outside of Canada has heard of this refreshing savory cocktail. I'm on a mission to change that, and I'm hoping that the Caesar will become popular with our neighbors to the south as well!

What to serve with a Caesar

Will you give Caesars a try? Let me know what you think in the comments below, or tag me #saltandlavender on Instagram! 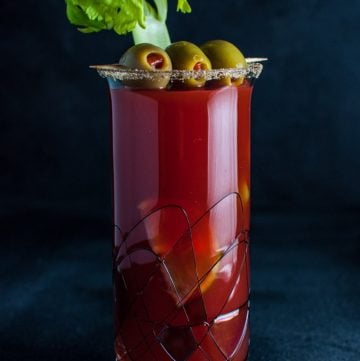