This sausage stuffing recipe is filled with Italian sausage, apple, fresh herbs, and it has a lovely soft inside and crisp outside. Perfect for your Thanksgiving table!

Want a holiday breakfast idea for your family? Try this Simple Breakfast Casserole.

Technically this is a sausage dressing since it's cooked outside the Roast Turkey, but I will forever refer to it as stuffing. Whatever you call it, you're gonna want to smother it with delicious Homemade Gravy. This rich sausage stuffing is a family favorite that stands out from the rest and will be the star of your holiday meal.

It's not hard to make stuffing with this step-by-step guide, so don't be intimidated! And oh man, the leftovers... if there are any, you could honestly eat it as a meal in itself since it's so hearty, buttery, and filling. It's the first thing we run out of in my home at Thanksgiving. Ok, maybe the Baked Mac and Cheese disappears a little bit faster. 😉

What you'll need for sausage stuffing

What kind of bread to use?

How to make sausage stuffing

Cut your bread into cubes (or tear it). Either do this a few days ahead of time and let it dry out, or you can use day-old bread and bake it in the oven until it's dried out, or use the pre-bagged dried bread cubes that some grocery stores will sell around the holidays. Add the bread to a large bowl. Cook the sausage in a skillet.

Transfer the sausage to the bowl with the bread, and drain the fat from the skillet. In the same skillet, sauté the onions, celery, and apples in the butter, and then add the chopped herbs.

Transfer the skillet mixture to the bowl. Stir the salt, pepper, and half the broth into the stuffing, adding gradually, and toss.

To another bowl, whisk the eggs and the other half of the broth, then add it into the stuffing and toss. Transfer the stuffing to a 9x13 casserole dish and cover with foil. Bake for 45 minutes, covered, and then remove the foil and continue baking for another 45 minutes.

How to make stuffing ahead of time

How to reheat leftover stuffing

More Thanksgiving side dishes to try

Questions about this homemade stuffing recipe? Let me know in the comments below! 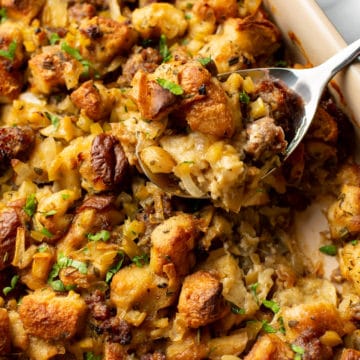