This Instant Pot beef taco soup recipe is healthy, hearty, and delicious. Add your favorite toppings and it makes a fantastic meal! 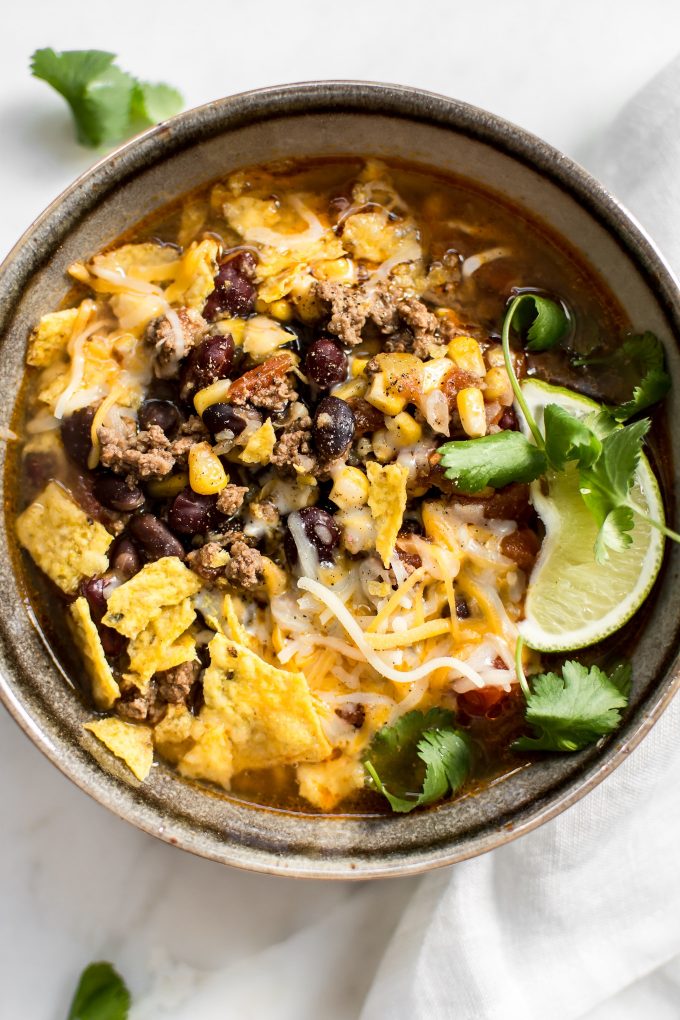 Well... it's finally happened! I bought an Instant Pot. I asked my Instagram audience in a super-scientific poll if they would be interested in some Instant Pot recipes, and I got a resounding "yes".

I've been on the fence for a while re: getting an Instant Pot. I'm often late to trends (and I don't like my counter cluttered with appliances I don't use), but I think that the IP will be around for a while.

Pressure cookers have always been around, but their popularity has been surging more and more now that the Instant Pot is here. I decided on an Instant Pot vs. a different kind of pressure cooker for a couple of reasons. 1) From my research it seemed to be very user-friendly. 2) It seemed to be the most popular one out there, so writing recipe instructions based on that particular brand will likely cast the widest net. I bought the third generation Instant Pot Lux model (it's also a slow cooker), and I am very happy with it so far!

Don't worry (especially if you're not a pressure cooker fan), this blog isn't going to turn into just Instant Pot recipes. People have asked me for them, though! So I am trying. 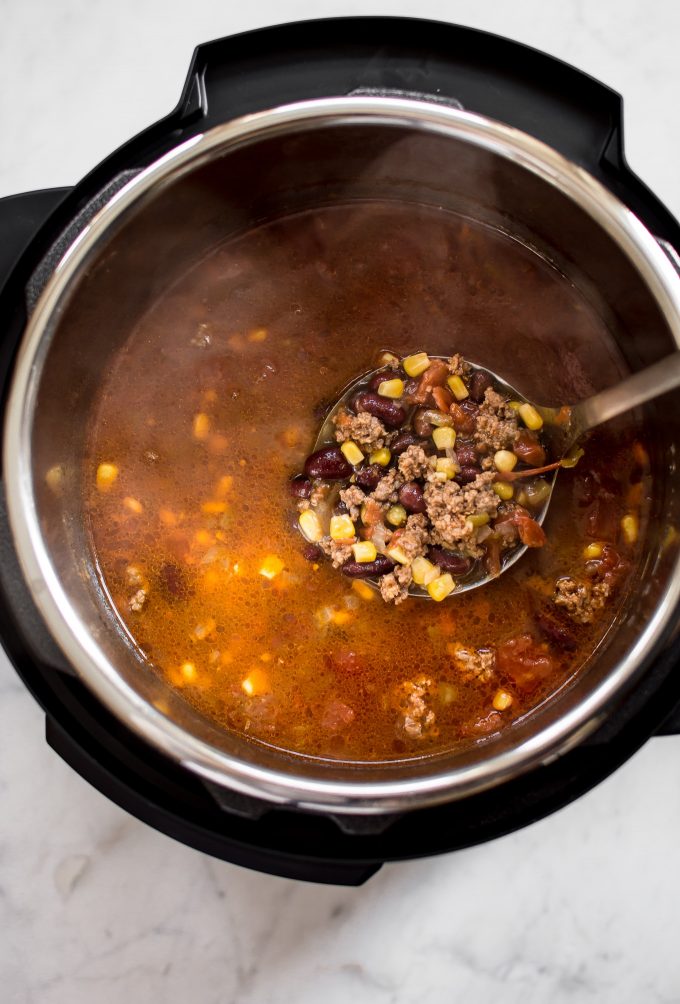 Why make soup in the Instant Pot?

I think Instant Pots are great for multi-tasking. Not just for things like dinner parties where your stove is monopolized, but for busy life in general. Before I got my Instant Pot, I didn't realize it took time to get them to pressure or that you had to do a pressure release. So, the actual cooking time on many pressure cooker recipes is lightning-fast, but the pre-and post-cooking adds on time to the total recipe. BUT... this stuff is pretty hands-off. You can just set it and it'll come up to pressure and release pressure by itself. You're free to do other stuff while it's cooking.

For those folks who don't like standing by the stove, the Instant Pot is pretty handy. It's sort of like a fast slow cooker if that makes any sense.

This pressure cooker taco soup recipe can definitely be made on the stove top, but I wanted to give it a go in the Instant Pot and it turned out nicely. And pressure cooking is great at preserving nutrients, so that's a bonus too.

It's easy! Brown your beef and some onions, add some broth, garlic, tomatoes, beans, corn and the taco spices. Let it cook and then top it with your favorite taco toppings.

Want to make a similar recipe in the slow cooker? Try my Crockpot taco soup recipe. Or try my creamy taco soup. 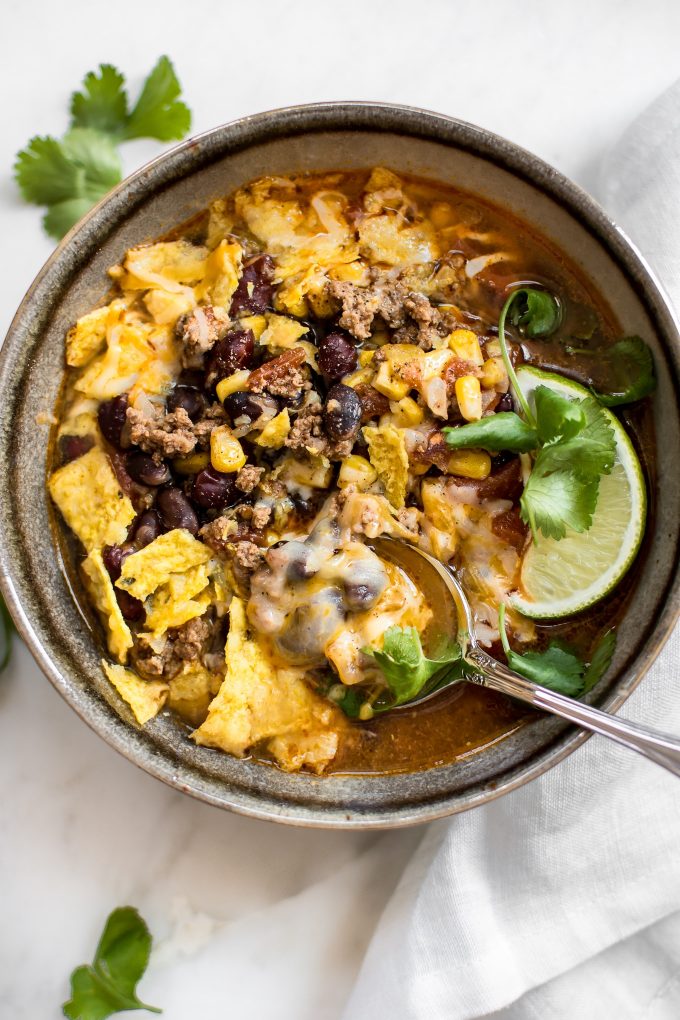 How to top beef taco soup

You can skip the toppings, go crazy with them, or do something in the middle. I would suggest: 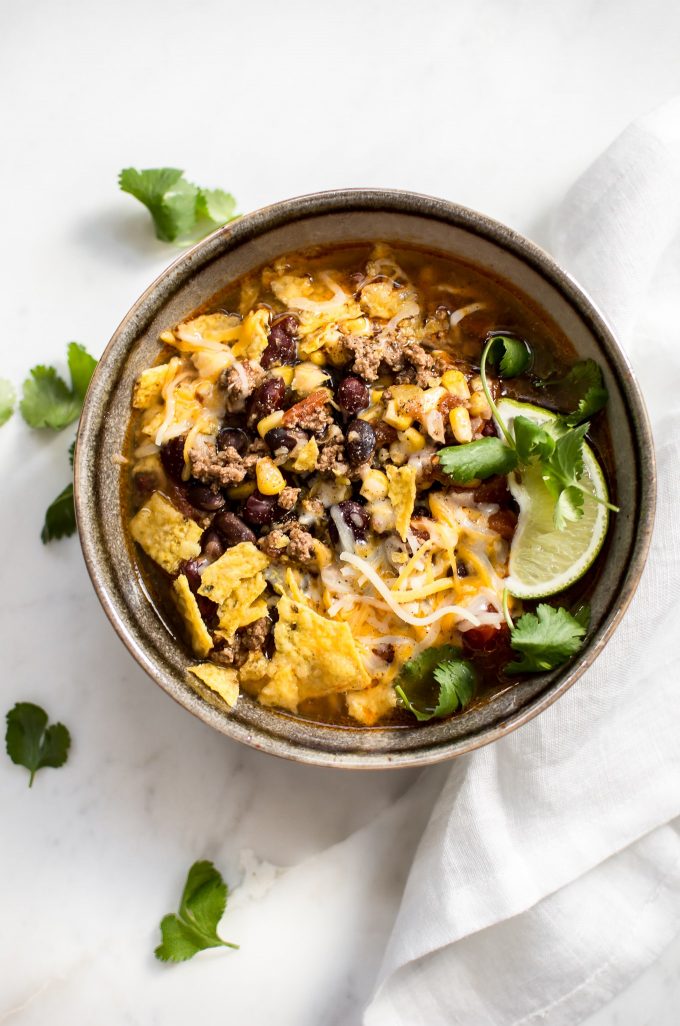 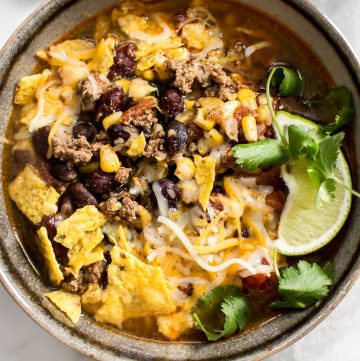 Calorie information is provided as a courtesy only and should be construed as an estimate rather than a guarantee.