This easy potato leek soup recipe is the simplest version out there! It's so silky and comforting, and it uses just a small number of everyday ingredients.

If you're wondering how else to use up leeks, you might also like my Bacon and Leek Pasta or Simple Sautéed Leeks next.

Leeks are so beautiful that they don't need much to dress them up. They're honestly one of the most underrated foods. My healthy potato leek soup recipe has just six ingredients plus water and salt & pepper, and the simplicity is what makes it shine! If you haven't tried delicate, buttery leeks, you're in for a treat with this cozy soup.

This classic potato leek soup naturally has a silky, creamy texture without the addition of any milk or cream, so it's easy on the calories and excellent if you're sensitive to dairy. I did swirl a little coconut milk in for the photos, but that's totally not necessary. If you'd prefer to make it with another method, try my Instant Pot Potato Leek Soup instead.

Can I make this vegetarian or vegan?

How to prepare leeks

How to make potato leek soup

This is an overview, and full ingredients & instructions are in the recipe card below.

What to serve with potato leek soup

I'm hoping you'll agree this is the best potato leek soup you've tried. I'd love to hear from you in the comments below if you made it! You can also tag me #saltandlavender on Instagram. 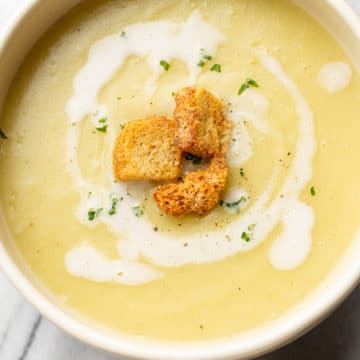