This chicken and corn chowder recipe is cozy, flavorful, and easy to make. Bacon makes this recipe extra delicious!

You may also like my Ham and Corn Chowder, which was inspired by this one.

Corn chowder is already comforting, but pairing it with juicy chicken and crispy bacon takes it over the top in this simple recipe that's made all in one pot. It's one of my go-to meals in late summer especially, but I find myself craving it year-round.

Corn is good any time of year if you buy it frozen, but there's something special about enjoying corn when it's in season in late summer through fall. Corn chowder always hits the spot as the weather starts to turn a little crisp. I also love using it in my Creamy Corn Chowder and this Salmon Chowder!

What exactly is chowder?

How to make chicken and corn chowder

Cook your bacon in a large pot until crispy, then take it out of the pot and transfer to a paper towel lined plate. Leave the grease in the pot. This adds so much flavor to the soup! Sauté the onion and celery in it.

Stir in the flour, and cook it for about a minute to cook out that "flour" taste. Add the garlic to the pot, and deglaze with the chicken broth.

Put in the remaining ingredients, saving some of the bacon for topping it later, and simmer until the potatoes are done and the soup has thickened as desired. Season with salt & pepper and garnish with chopped scallions if you like.

Will you give this chicken and corn chowder a try? Questions? Ask me in the comments. 🙂 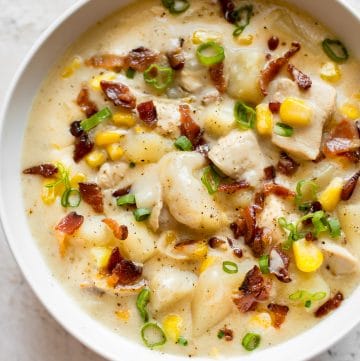