Love the Olive Garden's Zuppa Toscana? It's so simple to recreate it at home. This creamy sausage, bacon, potato, and kale soup is total comfort food!

If you haven't tried Zuppa Toscana yet, it's about time you do! It's immensely popular for a reason. It's simple to make even for new cooks, very satisfying, and feels like a cozy yet impressive treat that you could easily serve for company.

Ours has everyday fresh and inexpensive ingredients, and you can control exactly what's going into this robust soup that's inspired by the Olive Garden favorite. Our kitchen may be biased, but we think you might agree this copycat recipe is way better than the original.

What is Zuppa Toscana?

What's the best kind of potatoes to use?

How to make Zuppa Toscana

Sauté the bacon in your soup pot or Dutch oven. Give it a few minutes head start prior to adding the sausage pieces. Cook until the bacon is crispy and the sausage is browned. Meanwhile, prep the remaining ingredients as it's cooking.

Add the onion and garlic to the pot and sauté for 2-3 minutes, then add the chicken broth and water to the pot, followed by the potatoes and Italian seasoning. Bring the soup to a boil, and cook until the potatoes are done.

Stir in the cream and kale. Cook for another 5-10 minutes or so until the kale is nice and tender to your liking. Season with salt & pepper to taste!

Have you tried Zuppa Toscana? Leave a comment below. Questions? Let me know! You can also tag me on Instagram #saltandlavender with your beautiful creations. 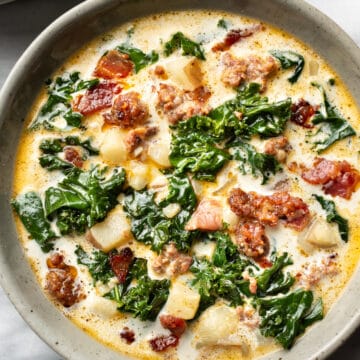 This post was originally published on September 23, 2015. I've updated it with new photos, text, and a better written recipe!