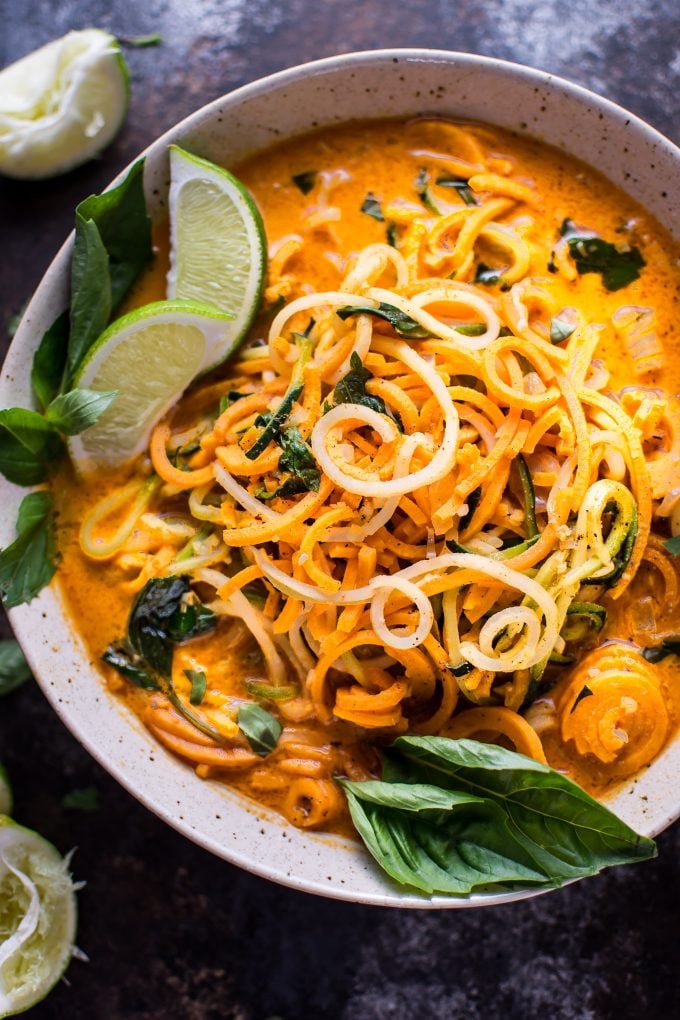 Despite all the ingredients we have in here, this Thai-inspired vegan coconut soup is actually really easy to make. Cooking with Thai flavors is a fairly recent discovery of mine, but I can't seem to get enough. I'm often late to the party, but it's better late than never!

I just love the creamy magic that coconut milk adds to dishes (especially vegan ones!).

If this recipe appeals to you, you may also like my vegan Thai sweet potato curry recipe (it's quite similar) or my 15 minute Thai green curry soup. 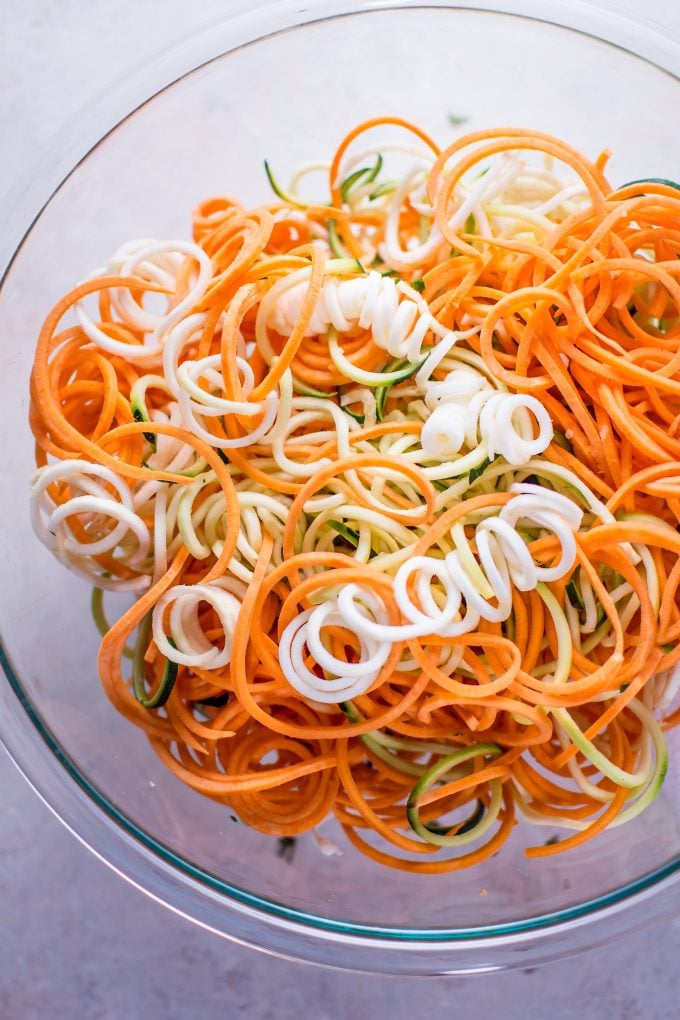 Ever since I got my spiralizer last Christmas, I've been cooking up a storm with it. I hadn't yet tried making a Thai soup with spiralized noodles, so here we are! Noodles in soup are wonderful in general, and you can feel good about having low-carb veggie "noodles".

I chose sweet potatoes, zucchini, and celery root. Sweet potatoes and Thai-inspired flavors just go so well together, and sweet potatoes are a popular spiralizer choice, so it was a no-brainer to go with those.

Celery root (celeriac) is often overlooked in cooking, but it adds a nice and fresh if slightly earthy flavor that's (surprise!) similar to celery. Don't be intimidated by its "hairy" outside. You can simply use a knife to cut away the outer layer to reveal its smooth inside. It then spiralizes easily. 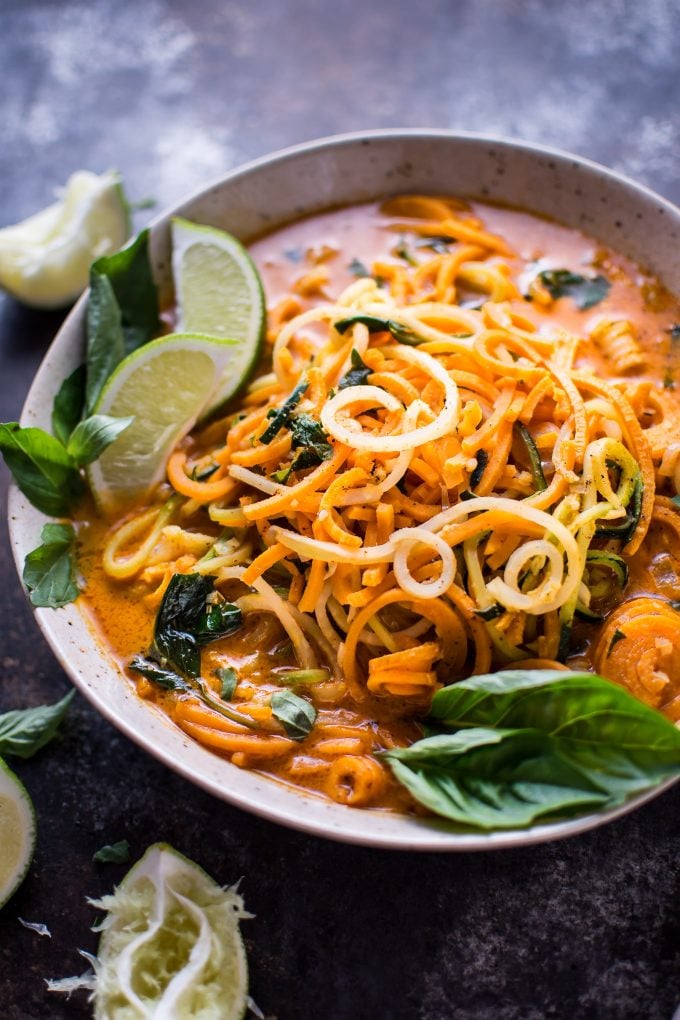 I really liked this Thai-inspired red curry soup and would have happily eaten more of it, but my husband actually called dibs on the leftovers and texted me from work about how much he was enjoying them. I'd say that makes a recipe a winner. 😛

I know it's warm outside, but this soup really hits the spot. It's light enough that it works for the summer weather. It's also a perfect way to warm up if you spend a lot of time in an air-conditioned office like I do. Or save it for winter!

In case you were wondering, this is the spiralizer I used to make this soup. 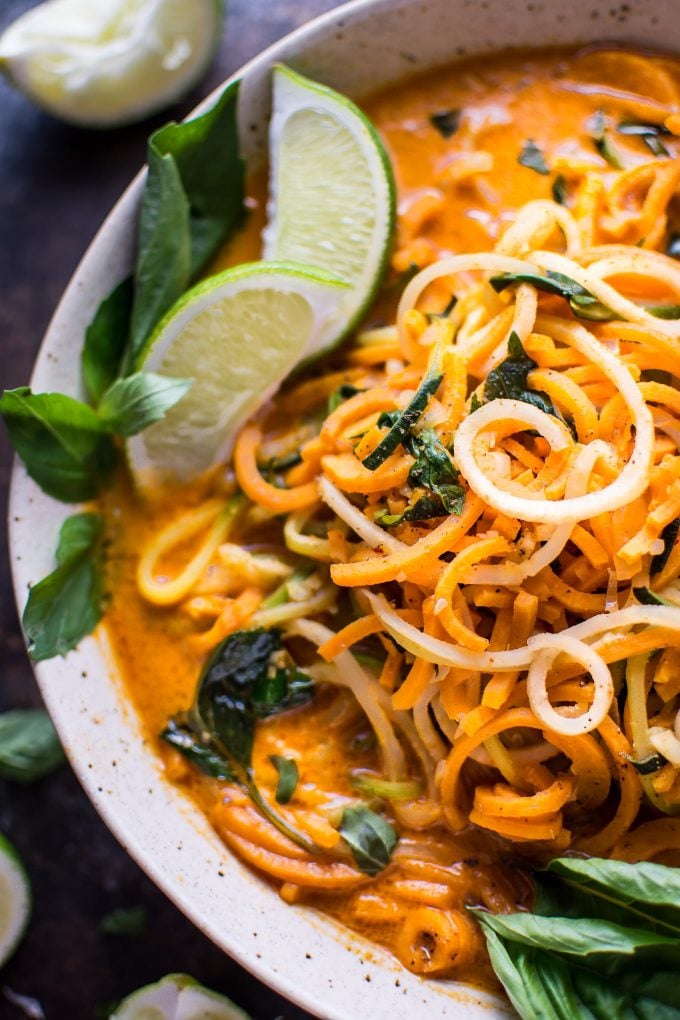 Will you make this vegan Thai curry soup? Let me know in the comments below! 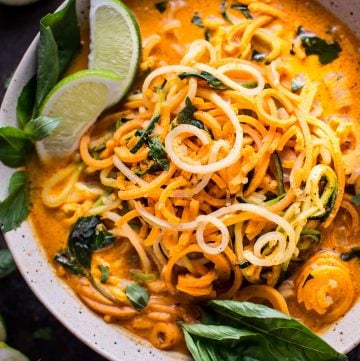